As one of the best ceramic product producers, Toshiba provides the finest Silicon Nitride that used in most critical applications worldwide. It is produced by Hot Isostatic Pressing and comply with ASTM F2094.

HRGQ superfinish blanks from Toshiba to Grade 5 and keeps stock for a range of gauges from M15 to P15. And we also do non-standard sizes.

Most common used in bearing applications, silicon nitride balls have a coefficient of thermal expansion of only 30% of steel balls, which means there is less friction generated in bearings as heat increases. Silicon Nitride balls requires less cooling system as they have low thermal conductivity that reduces the amount of heat absorbed. The temperature operating range for those balls are up to 800C(1470F). With non-corrosive, anti-magnetic and superior wear resistance, they are mostly used in high-endurance and high-temperature applications. 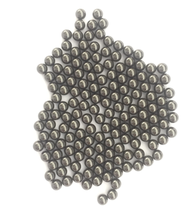